A new IZA working paper by Esther Gehrke and Michael Grimm addresses the apparent paradox between widespread support of cattle farming by agricultural policy interventions and negative returns to cattle as stressed in recent works. Using a representative panel dataset for Andhra Pradesh, a state in the south of India, Gehrke and Grimm examine the profitability of investing in and holding cows. 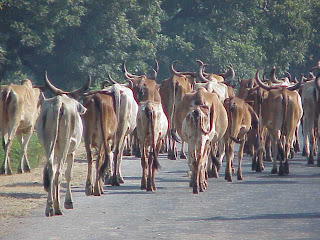 Whereas Anagol, Etang and Karlan (2013) had recently shown that cows have negative returns and therefore suggested that widespread cow holding would put into question the “central tenets of capitalism”, this paper shows that returns largely depend on the quality and size of the herd owned. Gehrke and Grimm find evidence for substantial up-front costs and decreasing marginal returns, hence returns become positive as the value and quality of cattle increase. The authors conclude that policies such as the 'One cow per poor family program' or the 'Targeting the Ultra Poor' policy, can only have sustainable poverty impacts if beneficiaries are enabled, for instance through credits, to invest enough into the quality of their cattle ensuring the average profitability to be positive. But abstracting from the investment aspect, Karlan and co-authors also rightly point out that a huge advantage of cows compared to other savings is that cows are not as liquid as money under the mattress and hence saving into cows is also a good long term commitment for people that tend to take myopic decisions.

The debate around the profitability of cows has recently received a lot of attention by the media and research. To follow this debate, see for instance:

Udder people’s money: Cattle may be a terrible investment but a decent savings vehicle (The Economist, 5 October 2013)

Holy Cows or Cash Cows, by Orazio Attanasio and Britta Augsburg. Attanasio and Augsburg show that the size of returns also heavily depends on climatic conditions, returns being positive in some and negative in other years.